The Most Valuable State Quarters – What Quarters Are Worth Money? 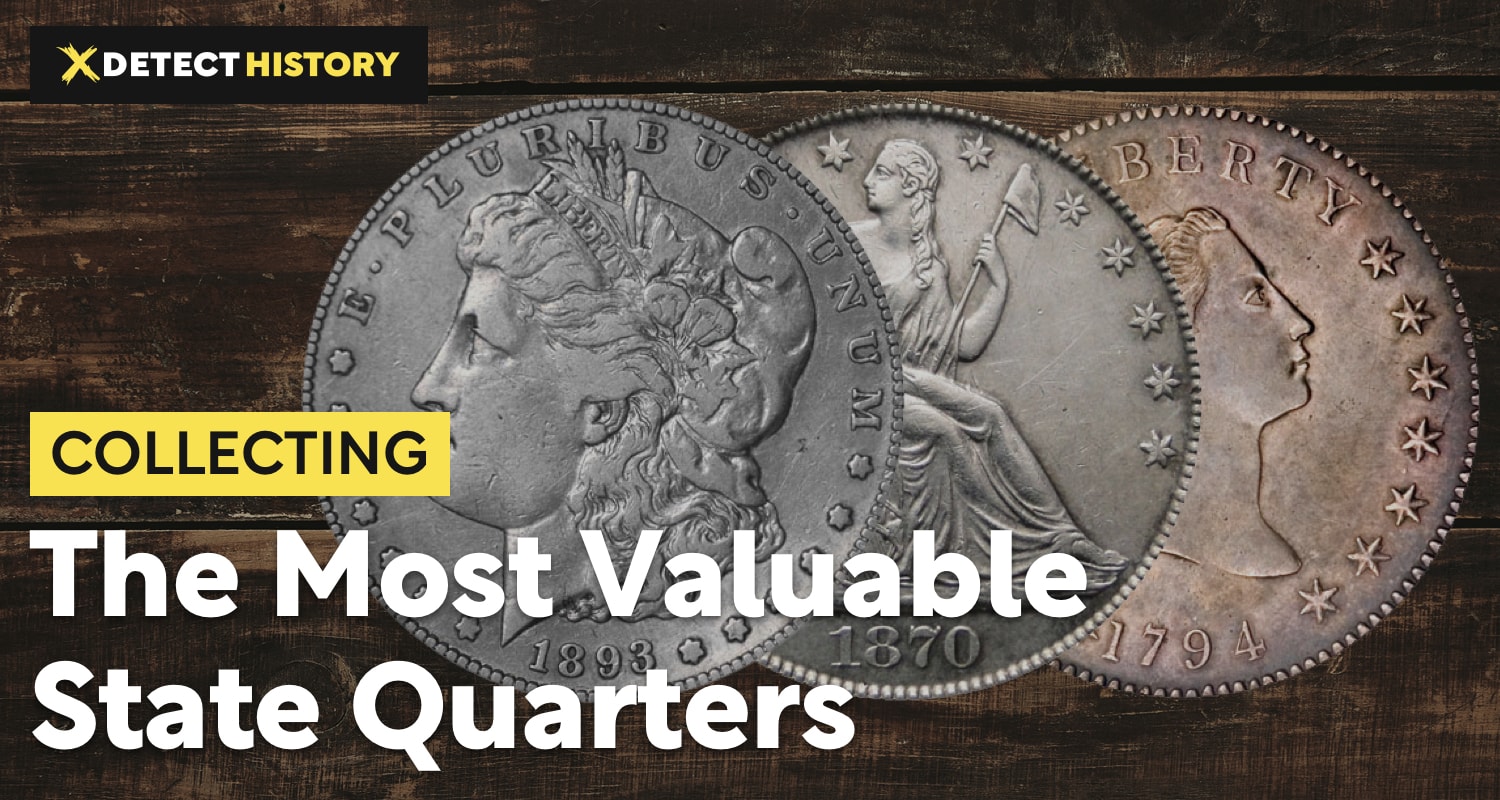 Quarters are a known case of being a favourite denomination for the US Mint design programs. Many beautiful quarter designs have been created within these programs. The very first quarter dollar was released back in 1796, and by now, there are around a dozen of specific types of these coins, and quite recognizable subtypes.

Coin collectors are constantly busy chasing the quarters, because these coins are abundant and there are many rare types and some exceptionally unique types. There are many silver coins that are for sure valuable, and many rare types of coins that are valued specifically for their uniqueness. So, those metal detectorists and collectors who are wondering what a quarter may be worth, will benefit from this post.

What are Quarters Made Of?

Many beginner detectorists interested in coins tend to believe that the value of the coin is defined mostly by its composition. However, the reality is that, while in the past, some coins were indeed made of gold and silver, since long ago this was not practical anymore. Quarters can be made of Copper, Zinc, Cupro-Nickel, Manganese-Brass, or Silver plus Copper. So, in many cases today, the quarter dollar value depends on more than composition.

The series of silver coins are quite impressive; these are not 2-3 coins. The main three mints that released silver quarters were Denver, San Francisco, and Philadelphia. The coin editions listed below are business strikes, not proof coins.

All coins without mint marks were released by the main mint in Philadelphia.

Some of the most valuable silver quarters include those released by Denver in 1935, 1936, and 1940, because it is extremely hard to find these coins in high quality condition. Coins of 1932 are valuable due to very low mintages, meaning they are rare state quarters as such.

There are also releases of valuable quarters with overstruck mint marks, like D (Denver) over S (San Francisco), or S over D, released in 1950.

The so-called Washington silver quarter series were released between 1932 to 1964. Each of the three main mints used to release different designs of the coin in different years; as a result, Washington series are variable and rare.

The Copper-Nickel quarters are basically copper-core series clad with nickel. The first such Washington quarter was first issued in 1965, as part of the series switch. In 1968, Denver mint mark was added. The first three years of production were mostly dedicated to proof sets, and then they were slowly replaced with special mint sets, released by San Francisco, in 1965, 1966, and 1967. There are Deep Cameo versions of these coins, which are extremely rare and therefore valuable.

Nowadays, copper-clad Washington quarters are indeed valued, but only of exclusive and unique variations or dates. The most expensive quarters from those are Deep Cameo versions, high grade examples of coins. Proof coins can also be of value.

Now it becomes obvious that the value of the quarter coin does not depend that heavily on its composition; obviously, copper-core coins clad with nickel are not really expensive in terms of material. However, all the nuances of their releases, rare proof series, rare examples, high quality coins in good conditions – all these are valued because they are unique. Some collectors even state that it is possible to find a unique and expensive coin in your change. So, to find out what coins are the most rare and therefore valuable, check out the list below.

The list below contains some of the rarest and the most expensive silver state quarters worth money in US history. 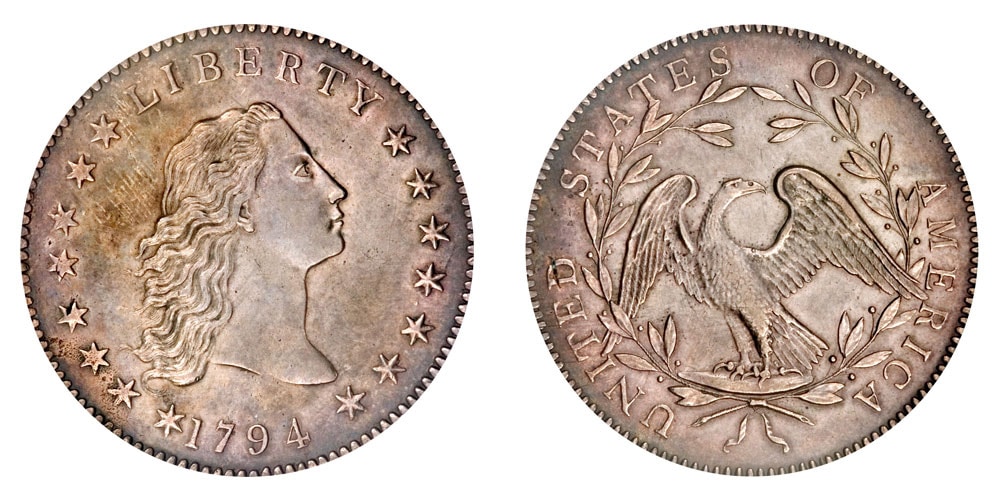 $10 million – this coin was basically one of the first to be released after the Declaration of Independence and ratification of the Constitution. It was the first coin made by the US government after they decided they did not want Spanish dollar as their currency. Obviously, the Flowing Hair dollars are not valued for their composition, but for their rarity and historical significance. 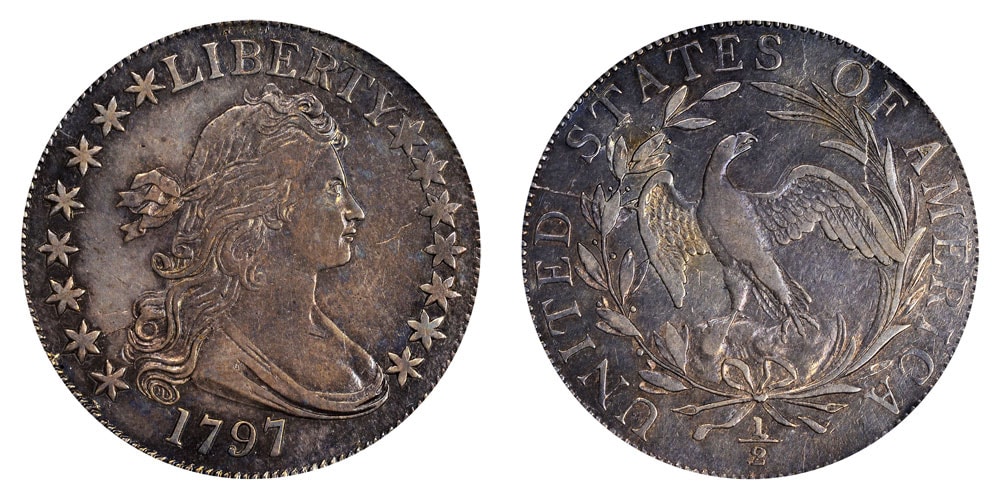 $1,527,500 – while the Flowing Hair coin was very significant, the Americans seemed to dislike the design, and requested from Congress to change it. As a result, the Draped Bust design was created. One of the unique features of these coins is the so-called “small eagle” design which was added only in 1796 and 1797; so these coins are rare and therefore valuable. 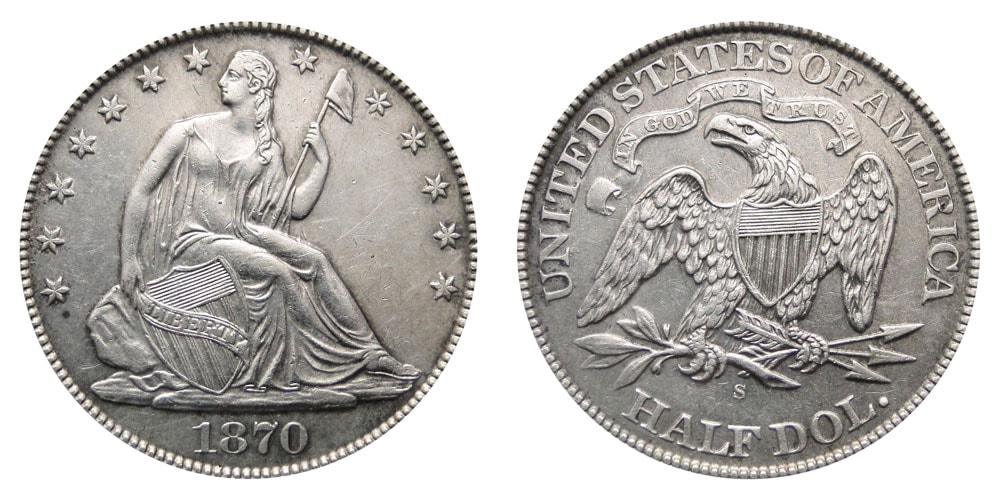 $1,092,250 – this design was the last silver dollar made by the US mints before the bimetallism brought by the Coinage Act. Another reason was that the Gold Rush made gold prices drop compared to silver, so people used to hoard and melt silver coins. As a result, all silver coins of this period are rare and expensive, but the S Seated Liberty Dollar is the most expensive. 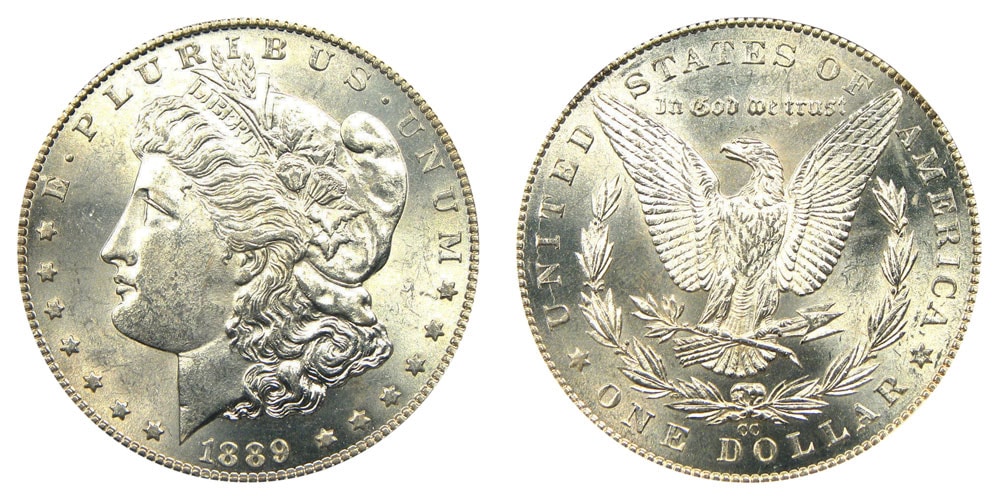 $881,250 – after the German Empire stopped making silver coins, price on silver dropped; moreover, the Coinage Act issued by the US government put the country on a gold standard. However, this caused deflation, and due to requests from citizens, the government decided to make a certain amount of silver dollars every year. So, Morgan Silver Dollars are not very rare as such. However, the reason why the coin is so valuable is because it is one of the hardest to find in mint condition, or close to it. 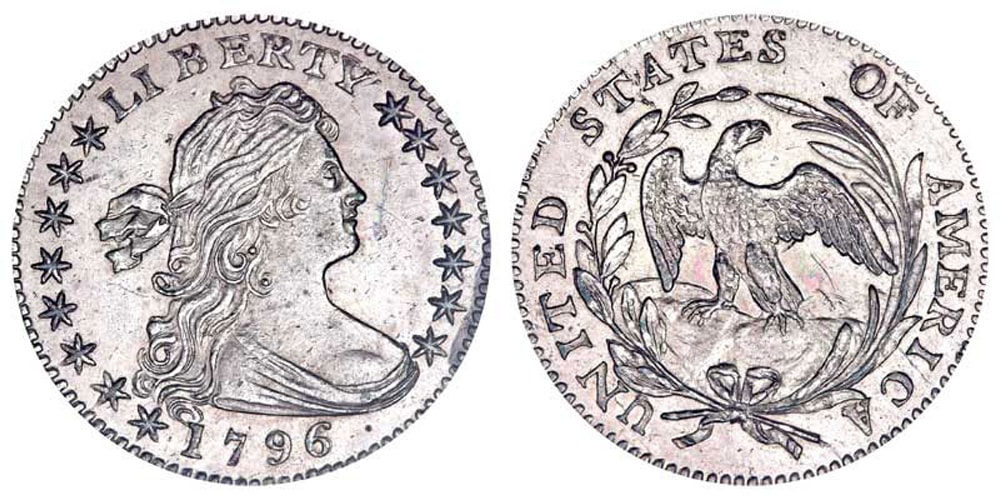 $822,500 – there were only 934 Draped Bust Half-Dollars with “small eagle” design produced in 1796, so these coins are particularly rare and expensive. 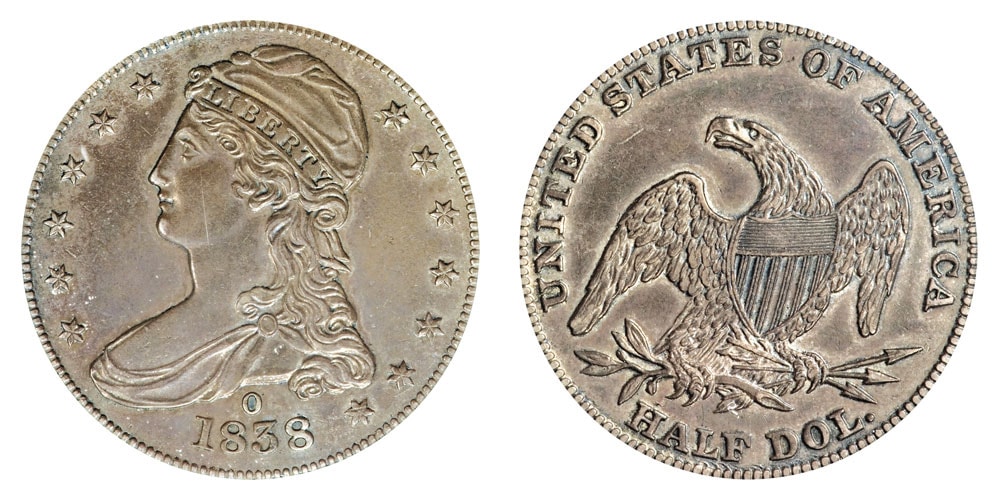 $763,750 – this design replaced the Draped Bust, and was released for a long period, from 1807 to 1839. One of the significant features of these most valuable quarters was that coins made in 1838 were made in New Orleans, and not in Philadelphia, so they had an O mint mark on them, being first of their kind and very rare. Moreover, in 1838, the US suffered an outbreak of the Yellow Fever, so a very small amount of these coins were produced that year. Today, only 13 coins are known to exist. 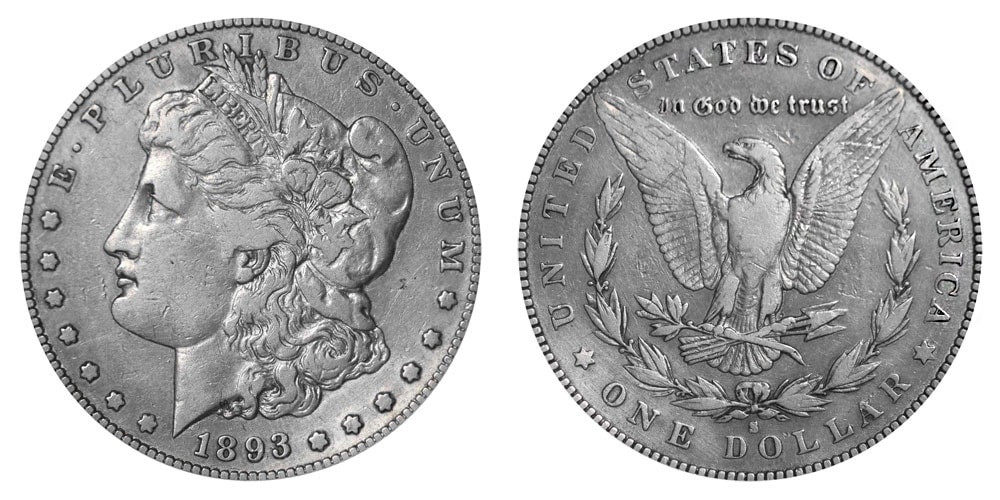 $646,250 – due to hardships of the population and widespread requests, the US government took another populistic step, and started buying even more silver every year to produce more Morgan Dollars. This decision was one of the reason of Panic of 1893, making these coins historically significant. 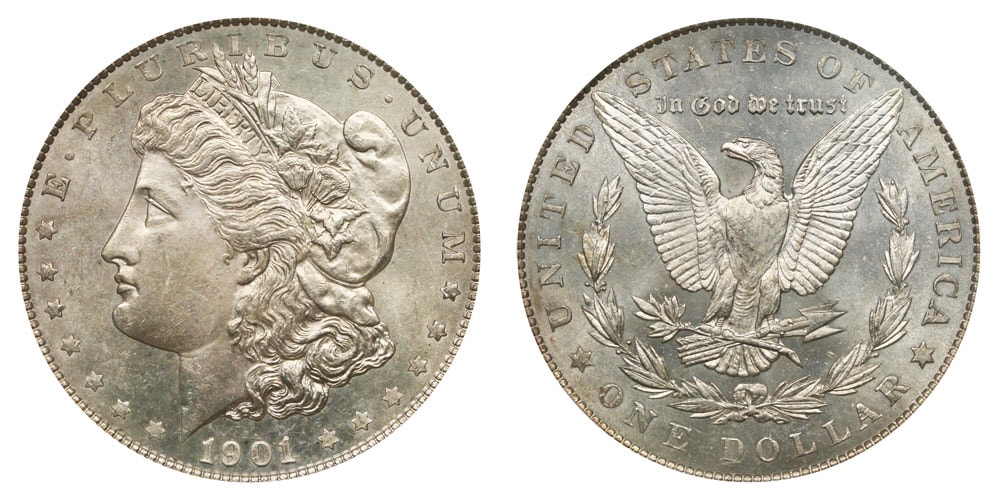 $575,000 – many Morgan Dollars were made during the years, including those by the Philadelphia mint. However, interestingly, specifically 1901 P Morgan Dollars in mint conditions are very rare. 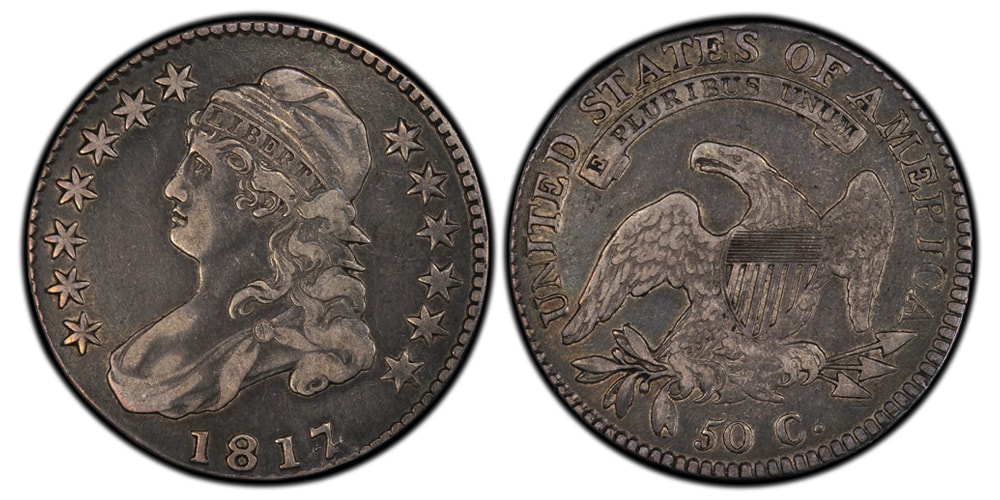 $282,000 – producing money and making new coin dies was expensive, so the mints decided to reuse the same dies from previous years, just stamping over a different digit to indicate a different year. The Capped Bust Half-Dollar is one of the examples of overdating; the 4 digit is clearly visible under the 7 digit. These overdatings were not errors, but they are rare and as a result, valuable. 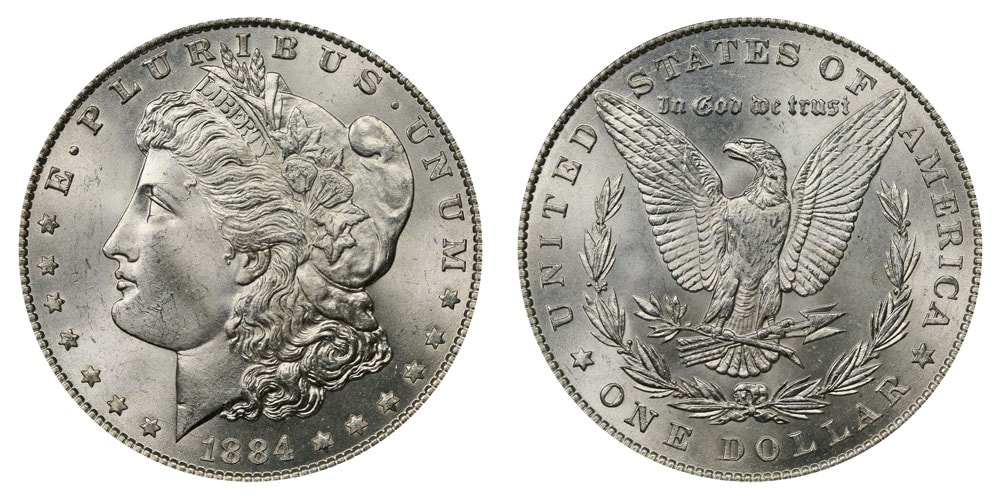 $215,000 – and lastly, more Morgan Silver Dollar coins. Again, generally the coin is not rare, and finding one in average or bad condition is totally possible. However, high grade coins are rare and valuable.

Besides these extremely rare and historically significant coins with high silver quarters value, there are also other coins that are hard to find, belong to unique editions, and so on. The best thing about them is that they are easier to find than $10 million-worth coins. Check the list below to find out about less rare, but also expensive coins, if you are wondering how much is a silver quarter worth:

If some detectorists or collectors believe that only silver coins can be rare and valuable, this is far from the truth. Below is the list of the most rare copper-nickel quarters that are valuable:

Where Can I Get Quarters?

Unless you are particularly lucky to find quarters that are worth money in your pocket or in the change box (there are indeed some valuable quarters in circulation), most probably the only way to get a particular quarter for your quarter collection is to buy it. Metal detectorists may also be lucky to find those, most probably in small towns, or in abandoned buildings rather than in the field.

What is the Last Year For Silver Quarters?

Silver quarters that contained 90% silver were last released in 1964.

Are Bicentennial Quarters Worth Anything?

In fact yes, but bicentennial quarter value is possible only if they are in perfect mint condition. Those in circulated condition are only worth their face value, and nothing more.

What Does Error Quarters Mean?