It has a rather modest metal detector coil, no ground balance, no VDI, and also its signal is too loud and there’s no option to settle it… However, for some time past, I have started to assess metal detectors by the number of finds. It often happens that two people, one with Ace 250 and the other with some Minelab Equinox costing like ten Ace 250s, are researching the same place. Same place, two different metal detectors, and both have finds!

Produces an electromagnetic field that applies a continuous sinusoidal wave to the location.

Such combination of search modes is easy to manage without additional tuning, and gives a wide range of tools for productive use.

Provides accurate identification of target to avoid damaging the target, or missing it altogether while digging.

Enough for wet sand search or shallow water search near the banks.

So, what’s the point in buying more expensive metal detectors, then? Two years after I bought Garrett Ace 250, my first metal detector, I also purchased Minelab X-Terra 705, which I have eventually exchanged for Garrett AT Pro. All these were used extensively while prospecting, and still I have always had my Garrett ACE 250 in trunk.

Ace 250 is the one most often bought by newbies who are not yet aware of the performance nuances of metal detectors. However, if one gets to choose from the catalogue features, say, Fisher F22 should be better than Ace 250. So, why this unexpensive metal detector for beginners became so cherished?

This is the most widely used metal detector in world. It is not expensive, and compared to other models, its price is rather attractive (there are even cheaper, we’ll talk about them later). It is easy to use for metal detecting and one can handle its functions in 15 minutes. It is rather reliable and has several additional coils. It does bring finds. So, this is how it is represented on the market. Although it is a rare case, but here the sellers don’t lie. 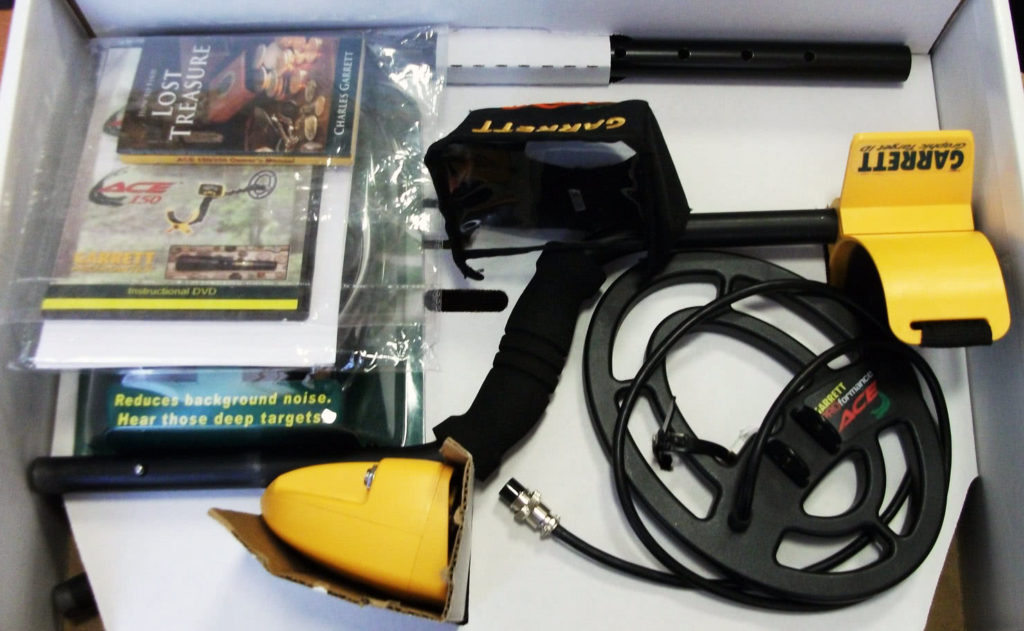 I have managed it pretty fast. The work book is less than twenty pages. Didn’t have to watch the video guide, as it was a no-brainer. During two years of active usage, Ace 250 stayed fully functional, despite the fact that either I used it, or I gave it to my friends, total newbies who have never had a metal detector but wanted to try. There are numerous coils, from huge to tiny, available on the market (while I have to admit that the prices might scare away a bit). And Garrett Ace250 always brings finds, even in the hands of a first-timer.

Garrett Ace 250 is as easy as a pie – you turn it on, and off you go. Setting available are regulated sensitivity and research mode choice. 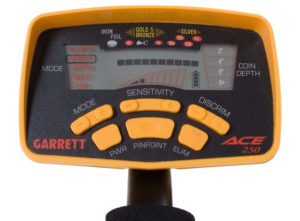 The metal detector is easy to transport and to maintain before research: you only have to maintain the carrying bar, connect the electric cord, and you’re ready to go.

It has a rather comfortable handle and elbow, and I mean it, since I have tried out numerous metal detectors and therefore I really appreciate simple and reliable options. With Ace 250 you won’t get tired fast, and will be able to research longer than with other models of detectors.

What is also important is that you can actually use one hand, which is not the case with expensive tools (like Minelab X-Terra 305-705).

So, we have simplicity, reliability, and efficiency in terms of finds. This is the best choice for a newbie.

Garrett Ace 250 is not expensive, but there are metal detectors that are even cheaper. However, I see no point in metal detectors with no pinpoint (what a pun!) mode, that is, without “accurate object center identifier” function. I like researching for coins, but digging 4 square spit pits to get a coin is too much for me. It is better to turn on the pinpoint and identify where the object is, exactly. This is why I do not recommend different cheap models like Bounty Hunter and even Garrett Ace 150, a cheaper model in the Garrett line.

So, Fisher F22 and Teknetics Eurotek PRO (only Eurotek PRO, simple model has no pinpoint function either) are still cheaper than Garrett Ace 250. However, I did not like Fisher F2… The discrimination really average, VDI which is no much boasted on by Fisher F2 functions inadequately, and the coil itself is poor (worse than in Garrett ACE 250). 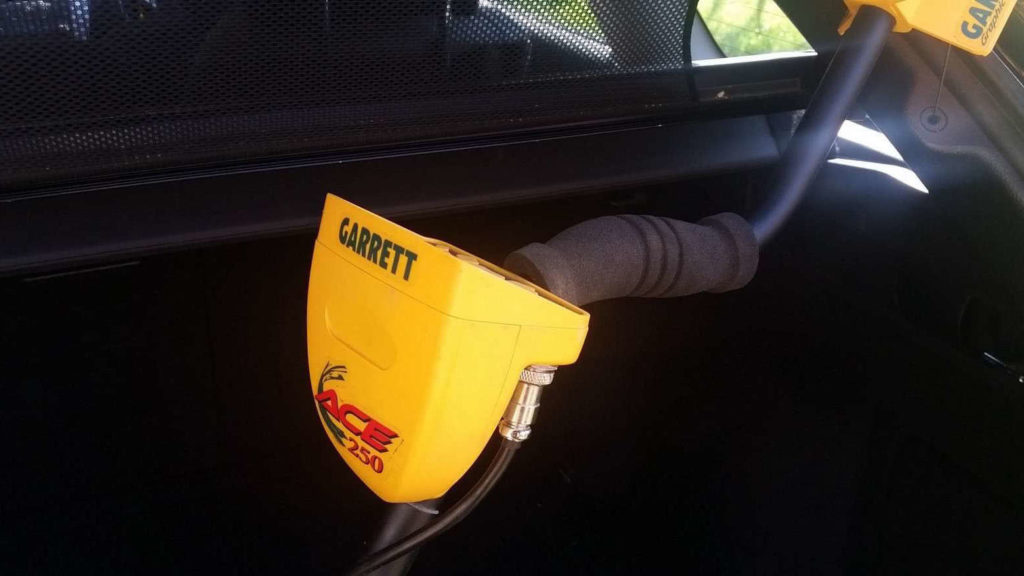 We have already discussed numerous advantages of the tool, but what about its disadvantages? For sure, there are some.

But, I have bought my Garrett Ace 250 many years ago, and I have never been sorry about that. It is simple, reliable, and it brings finds. Obviously, it does have flaws, as any other metal detector.

Garrett Ace 250 has a rather fragile elbow which is easy to break, if you bump it or it gets excessive pressure during transportation. However, the most frequent case is using it with larger coils (this is the most essential problem with the big coils). Don’t waste your time of repairing the broken elbow, it will fail again. So you should either make one for yourself, say, of a plastic water-pipe, or buy a new one. Original elbow is a bit costly, but there are plenty of Chinese alternatives.

Garrett Ace 250 has no volume regulator. While I can’t call it a problem, sometimes it is really too loud. The simplest decision here is to cover the loudspeaker with a sticky tape. Or it is reasonable to actually use headphones with volume regulation – you will hear the signal better, and will also save battery charge.

When the batteries discharge, Garrett Ace 250 starts sending false signals. You can consider them accurate being unaware of the problem. But if you put the metal detector into the air, it will still give you signal, meaning that it is time to recharge the tool. In addition, when the batteries are half-discharged, ACE 250 starts to lose its depth of detection (in about an inch).

Garrett ACE 250 has general search modes most Garrett machines feature. However, this is actually an advantage, because preset modes are always easier to operate with, and easier to get used to. Overall, any detectorist who has already had their hands on either of Garrett Ace will find their way quickly with a different model in the series.

Mode, created to spot various metals, in order to get a full picture of the location. This mode can also be used to get a more comprehensive vision of an unclear target.

This mode is good for finding coins, and works best for US coins, mainly. The drawback is that it can fail to notice other types of targets.

This is a specific mode to spot low conductivity items, which are usually relics. This mode also filters off trash that is especially harmful in interpreting signals from low conductivity targets.

Settings may be programmed by the user according to their specific needs, and saved to avoid repeated tuning, if these settings are used often.

At the end of the day, Garrett Ace 250 has never been broken during my two years of using it actively, despite the fact that I never watched it specifically, and it was often given to other people. It does bring finds. The tool performs fine with other coils. On salty sand (I have researched on the beach) you can prospect, too, but have to get used to small false signals from time to time.

But the most important thing is, after I have tried out different metal detectors, I still like my good old Garrett Ace 250. If I happened to be a newbie right now, I would have myself recommended this best budget metal detector to myself.

With Garrett Ace 250 you will be confident in its reliable structure and simplicity of performance. This best metal detector has the widest range of coils compatible with it (there is no other metal detector with the same quantity of options). You will always have finds.

And after you decide to level up with your metal detector, you will always be able to sell your Ace 250 in any condition, as it is the most demanded model of used metal detectors. 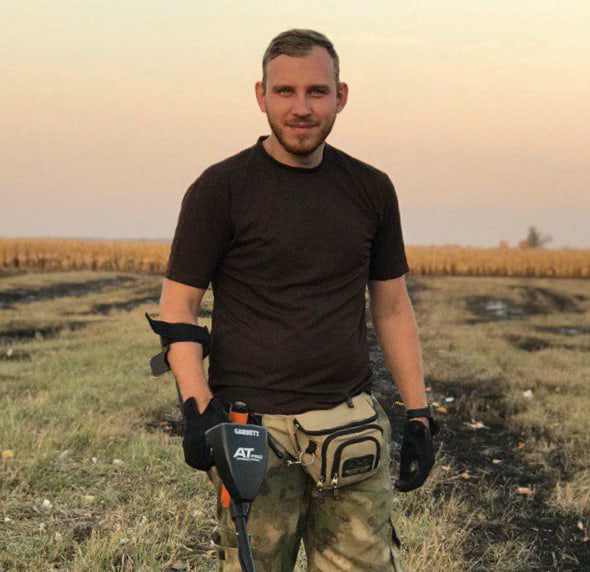 Hi detectorists! I’m Michael Moore, founder of this website, and a dedicated treasure hunter since 2013. If you want to be posted about the most recent news and updates in metal detecting, releases, and trends, subscribe!