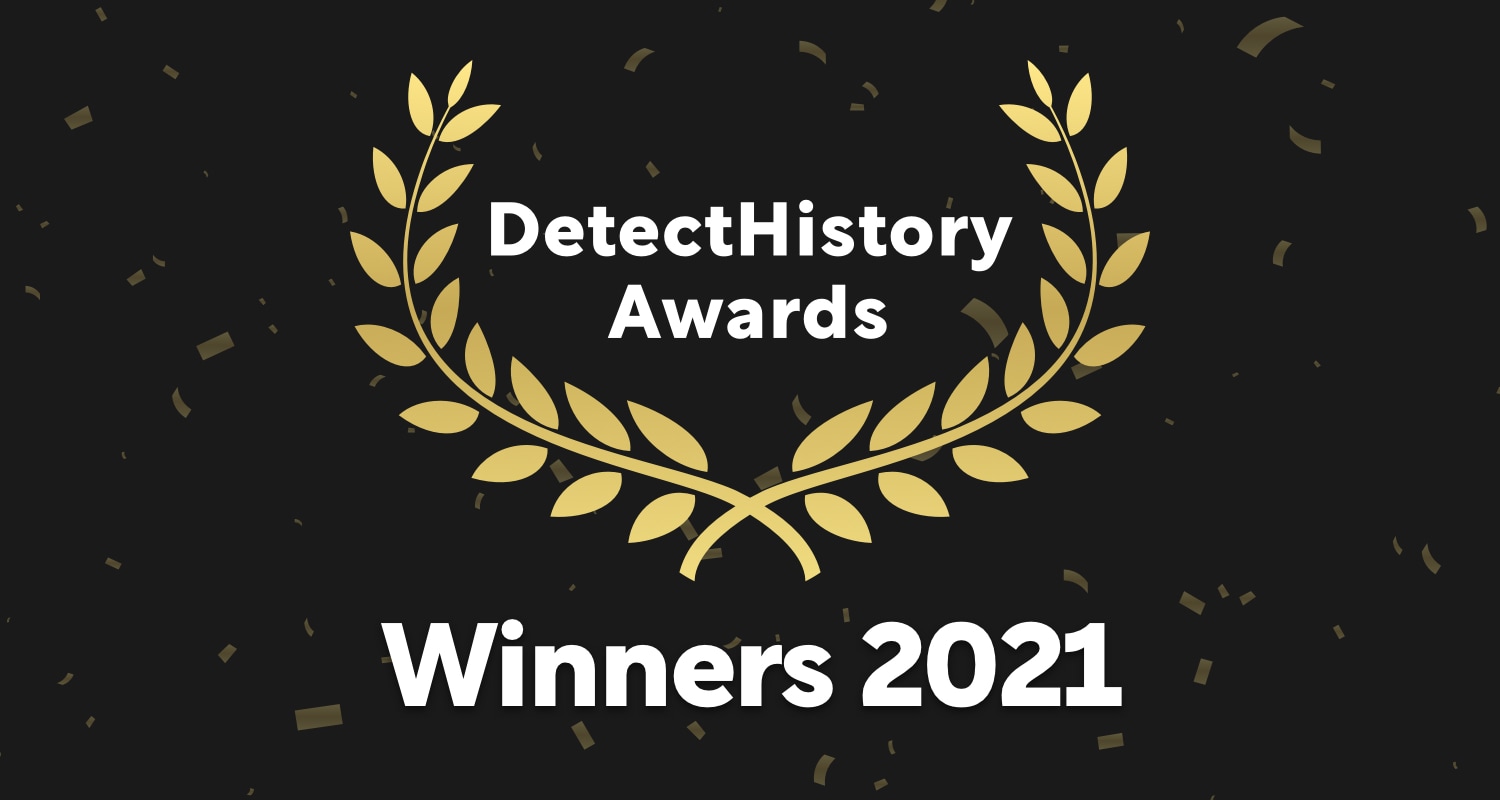 For the third year in a row, DetectHistory organizes an Awards for the best metal detectors in the hobby detecting niche. The purpose of this event is to give all treasure hunters an opportunity to give their voices to their most favourite machines, and also to say “thank you” to those metal detector manufacturers that really put in the effort and innovations. Therefore, the DetectHistory Awards is a way to celebrate some great metal detectors, and to bring the community together.

This year, three outstanding metal detectors were chosen as the best in each category. Please check out the winners below! Maybe one of them is your favourite? Or your next best choice? If you want to learn more about the previous DetectHistory Awards events, please visit the Awards page. 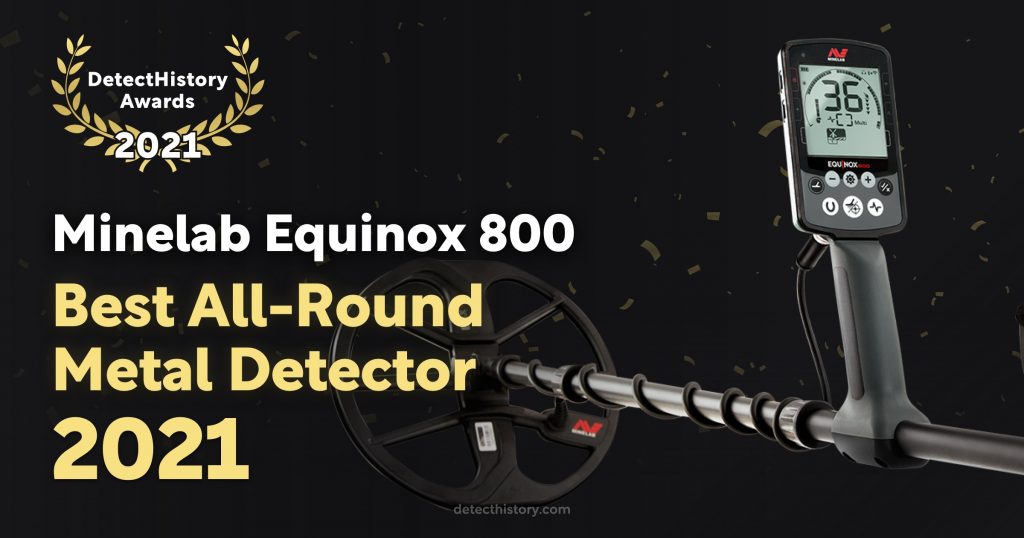 Minelab Equinox 800 is a true leader that has won the hearts of so many treasure hunters around the world, due to its really outstanding quality and tech specs. This is a versatile, universal machine for hobby metal detecting, that shows seamless performance and adds productivity on any location.

Minelab Equinox 800 is a true favourite, and this is not its first victory in the DetectHistory Awards – actually, it was a winner in 2019 and 2020, as well! This year, Equinox 800 has won the award clear of its rivals, despite the fact that the competition was fierce.

In this nomination, three leaders in the category have received the following amounts of votes:

We really expect a serious competition next year, between Equinox 800, The Legend и Deus II, because at last each of them has decent competitors. Will that actually mean that Equinox risks losing its leading positions? Or Minelab can surprise us in 2022? 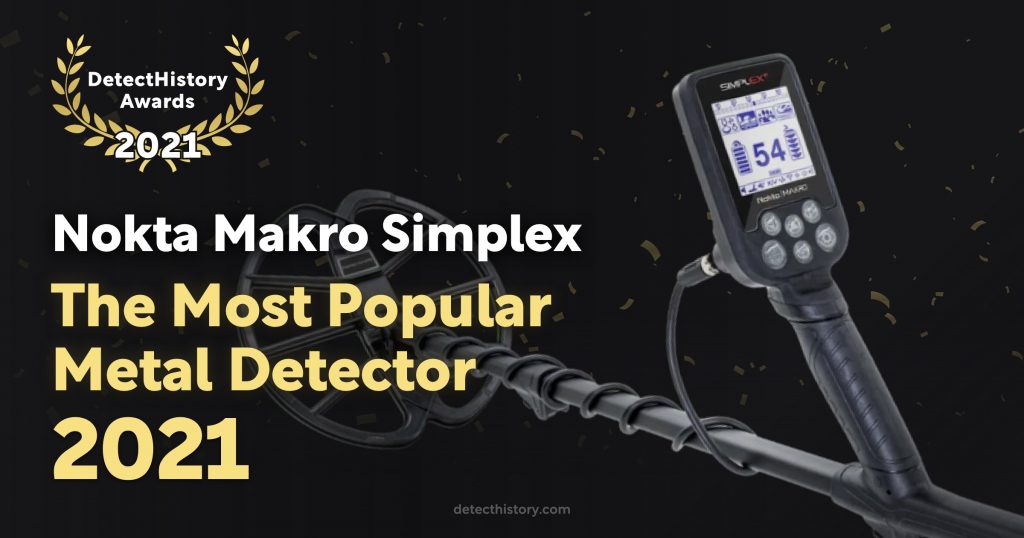 Nokta Makro Simplex is a true leader when it comes to popularity among treasure hunters “of all trades”, so to say. Its amazing combination of features, paired with unprecedented simplicity of operation, has won the hearts of many people, especially beginners. Nokta Makro Simplex has set a new level of quality for beginner-friendly detectors, and its victory is definitely a deserved one!

Nokta Makro Simplex gets the Most Popular Metal Detector Awards for the second time in a row, because it was a hands down winner in 2019 as the best new metal detector, and as the most popular metal detector in 2020. This year, Simplex became the leader again, although Rutus Alter71 was close on its heels.

In this category, the three main leaders had votes divided in the following manner:

It seems that Nokta Makro Simplex will remain the most popular metal detector for a long period of time, considering the high quality of its performance, and its versatility. Garrett ACE metal detectors had the same effect of long years of popularity, due to their affordability and simplicity in operation. At the same time, one must not depreciate Rutus Alter71, which according to our observation becomes really popular in Europe, and in the future, it can become a serious competitor. For Rutus manufacturer, this situation can become a great stimulus. 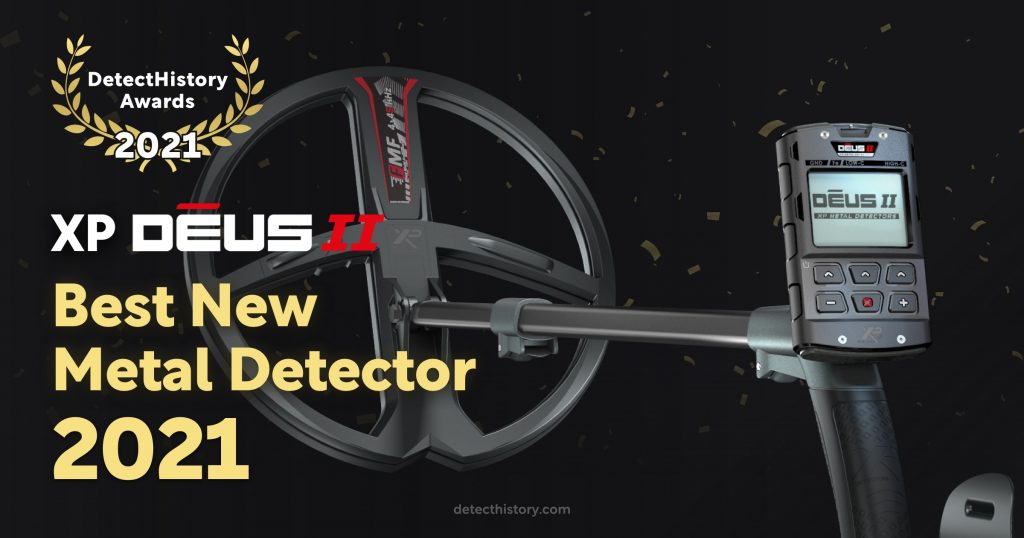 The King is back! The enhancement of the famous XP Deus showed itself as really successful. This metal detector has surprised us all with high quality of operation offered, and an unprecedented combination of tech specs and some unique features. It seems that the treasure hunting community puts high hopes into this metal detector, and for a good reason!

This was a harsh competition, indeed, but XP Deus II was ahead of Nokta Makro The Legend by 2% of the votes, and became the winner of the Best New Metal Detector category.

In this category, the three leaders had the following percentages of the votes:

If you ask me, I’d say that assessing new metal detectors is the hardest task, especially before one can get their hands on each metal detector. Each of the competitors could win in this category, since each metal detector has its outstanding features and advantages. Obviously, DEUS II is one of the most technologically advanced hobby metal detectors made in the last 10 years. From all appearances, XP manufacturer has succeeded in updating its legendary Deus machine. We will still see, of course, in 2022, but most probably, XP Deus II will prove its leadership.

How We Choose Winners

We choose the nominees for the Awards based on a set of requirements the metal detectors have to meet, to fit a certain category. We also ask the opinion of experts in the niche, to make sure we choose the nominees adequately. However, the next step depends only on the votes of DetectHistory readers and generally the treasure hunting community. This year, we have provided an opportunity for an open voting via the questionnaire available to any treasure hunter. The process of counting the votes took some time, but eventually, we have our winners! The manufacturers will be sent the awards figurines, and hopefully will even send their photos with the figurines back.